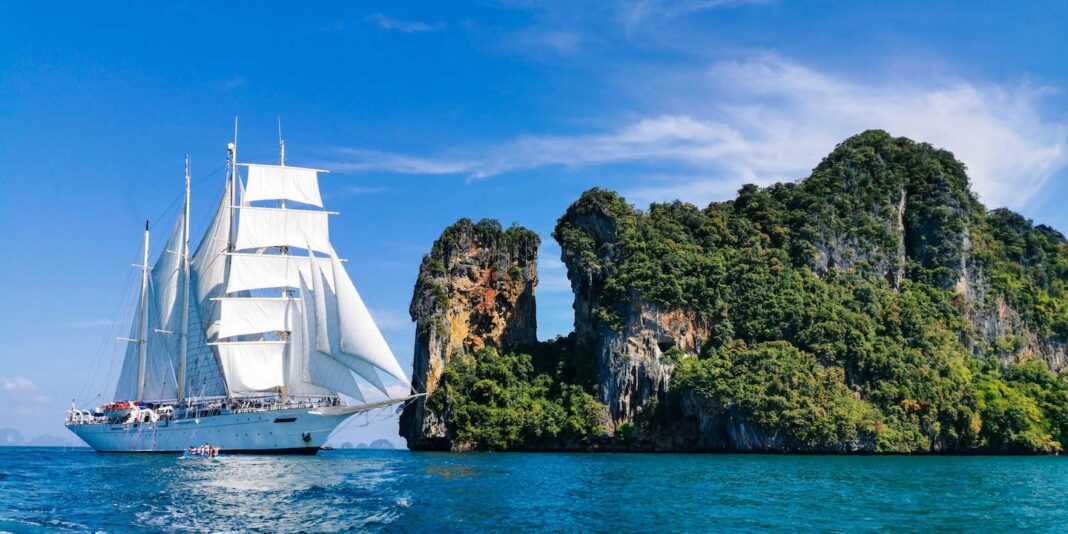 Sailing with Star Clipper through the paradise Andaman Sea

"Midship" echoes across the upper deck as the sails flap loosely in the wind. Captain Sergey Tunikov adjusts his RayBan sunglasses and squints into the sun. So do almost all the passengers watching the anchor being raised. The helmsman repeats the command, "Midship Captain!" Slowly, the Star Clipper turns into the wind and picks up speed. The four-master is on its way to its first destination, the Thai island of Ko Butang.

Until then, there are still around 100 nautical miles (about 185 kilometers) ahead of us, which the ship will cover under full sail and without engine power. But before the guests can relax at the "Tropical Bar," it's the turn of the sea rescue drill, which is mandatory for all guests, regardless of whether you've sailed with the ship a hundred times or never before. "This is for your own safety," says Cruise Director Peter Kissner in a heavy Bavarian accent. It's a voice you'll hear regularly over the next week. He is responsible for the guests on board and provides the 150 or so passengers on board with regular information about the trip and the itinerary.

The uninhabited island of Ko Butang is located just north of the Malay coast and is part of Thailand's Tarutaro National Park. The island is relatively unknown. Only sailors and some speedboats stray to the very beautiful beaches of the small island. By the way, the Star Clipper is one of the few larger boats that are allowed to sail and anchor here in the national park. The reason for this is a visit of the royal family on the four-master a few years ago. "The king's sister traveled with us twice and saw how important it is for us to treat nature," says Cruise Director Kissner. "Since then, our cruise line has been allowed to sail here." 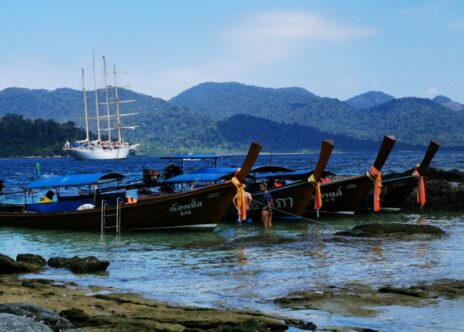 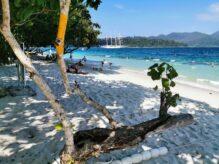 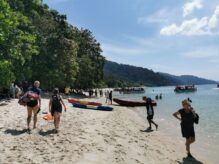 Only biodegradable straws on board

Great attention is paid to environmental protection on board. So there are only straws that are biodegradable. Recyclable tableware is used at the beach barbecue, and the ship sails as often as it can. "On average, we use two tons of diesel per day to generate the necessary electricity on board" says Peter Kissner. "Large ships use an average of 57 tons of diesel per day."

The electricity generated by the engines is mainly needed for the kitchen and the production of drinking water. "We use 55 tons of water per day," the cruise director continues. "We produce that amount ourselves every day from seawater." It is not without reason that the Star Clippers shipping company has been named "World's Leading Green Cruise Line" six times. As a rule, the engines are only started for mooring or anchoring.

Captain Sergey Tunikov is in command

Back to the route. The ship reaches the archipelago of Ko Butang around 12 noon. Captain Tunikov has taken command on the open bridge and drops anchor directly in front of the island. About 30 minutes later, passengers can go ashore by tender boat. Those who want to can rent a kayak, stand-up paddle or sailboat that the sports team has brought ashore in the meantime. At 5 p.m. the last tender boat returns to the ship. One hour later, the Star Clipper sets course for Penang Island in Malaysia. 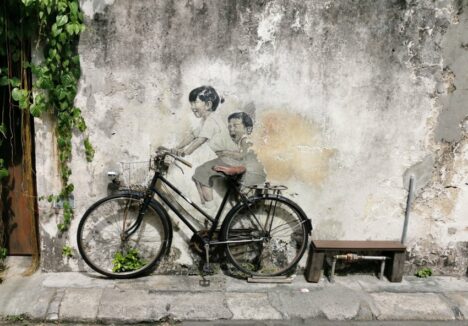 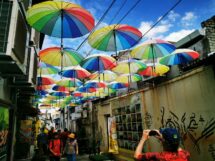 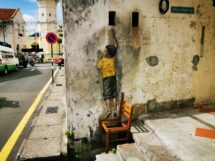 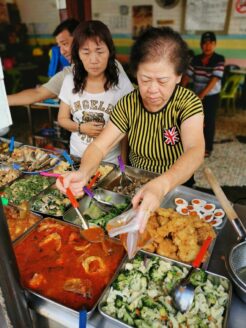 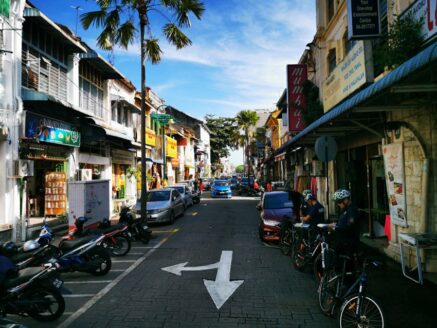 We reach the port of George Town on Penang early in the morning around 7 am. It is the only time on the trip that we moor in the harbor and leave Thailand. George Town is the second largest city in Malaysia and was founded by Francis Light in 1796. The town has a historic center with "shophouses" that date from the 19th or early 20th century. The architecture of these houses, called "Straits Ecletic," has European, Arabic, Chinese, Indian and Malay influences. Penang was the first British settlement on the Straits of Malacca. By 5:30 p.m., all passengers must be back on board. Captain Tunikov has the anchor raised at 5:45 p.m. and sets course for Ko Andang. There are 115 nautical miles ahead of us.

Hardly any people live on the islands of Tarutao National Park

Ko Andang, like Ko Butang, is also part of the Tarutao National Park, which consists of 51 islands. The main island Ko Ta Ru Tao is the largest island of the group and is located only eight kilometers from Landkawi in Malaysia. The park was the first National Marine Park in Thailand and offers numerous waterfalls, winding river courses, caves and a variety of protected animals. One reason for this is certainly that hardly any people live on the islands and only three islands can be reached by boat. 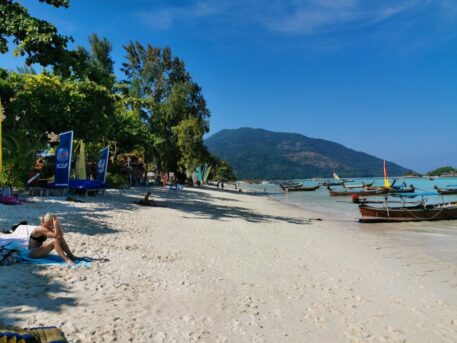 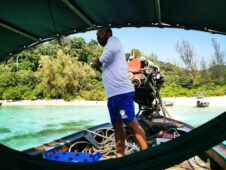 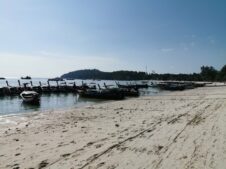 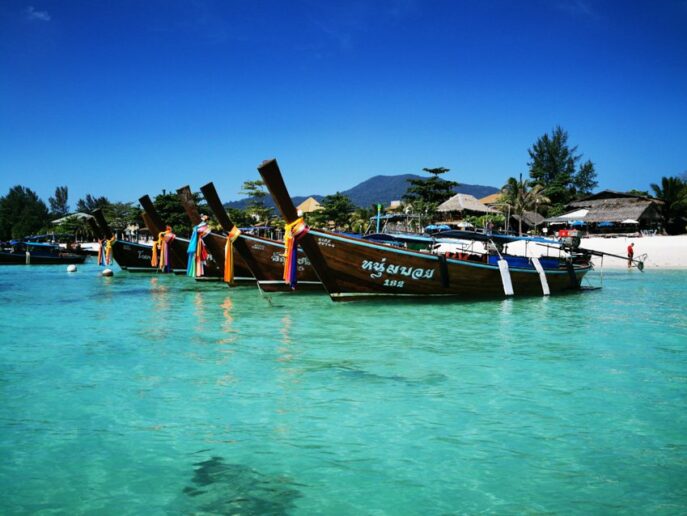 Again, there will be a tender boat service between the island and the sailing ship. If you feel like it, you can take a longtail boat to the island of Ko Lipe, which is one of the inhabited islands in the group. Ko Lipe is about a 30-minute drive away and, in addition to numerous restaurants and cafes, also offers two great beaches. However, significantly more crowded beaches than Ko Andang.

At 6 pm the Star Clipper turns back into the wind and sets course for Ko Rok Nok island, heading for Lanta National Park. The most beautiful island of the tour, as most guests on board think. Around eight o'clock in the morning we anchor off Ko Rok Nok, which can only be visited in good weather. However, if you make it to the white sandy beach, you are in paradise: crystal clear water, a small coral garden that becomes clearly visible at low tide and a very nice empty beach. This time, unfortunately, the last tender boat goes back already at 15:30. 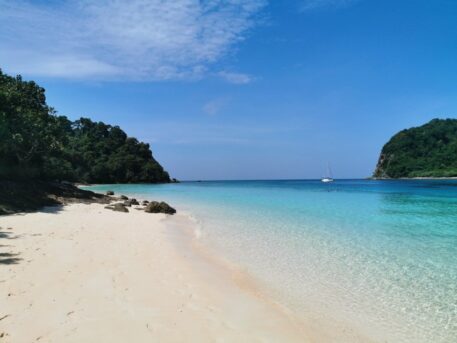 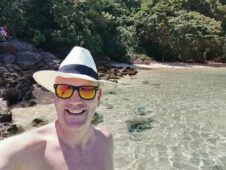 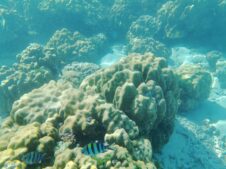 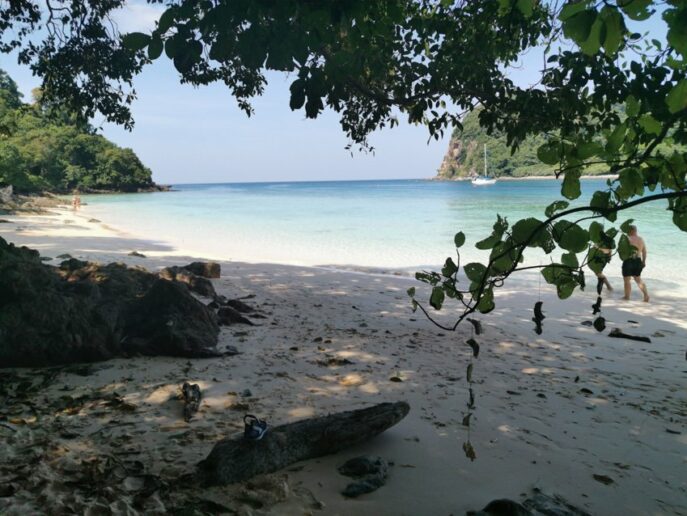 The next morning we reach the world famous Ao Phang Nga Bay, which was declared a national park in 1981. In the bay, steep limestone cliffs rise from the sea, overgrown with tropical plants. On or in the rocks you can find dark caves and grottos, some of which are decorated with huge stalactites. A beautiful sight, which unfortunately was discovered by the film industry and then tourism. The James Bond classic "The Man with the Golden Gun" was filmed here, which still attracts thousands of tourists per day. All of them are brought by boats to the small island, which is full of stalls. An absurd sight when you are actually in paradise. 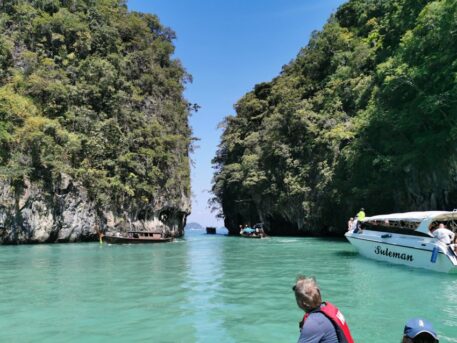 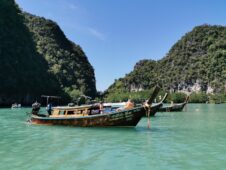 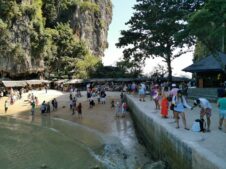 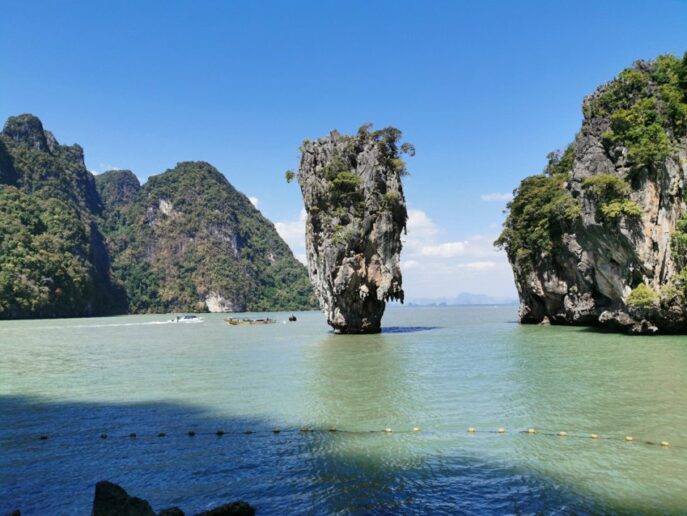 Ko Similan was hit hard by the tsunami in 2004

The last island we visit on the trip is Ko Similan, which belongs to the Mu Ko Similan Marine National Park. The archipelago was uninhabited until the 80s. He when tourism brought the region more into focus, first came the fishermen and then the tourists. Both led to the numerous coral reefs being damaged or destroyed to such an extent that the Thai government made it a national park in 1982. Fishing around the islands was prohibited and the park was closed from May to October. In 2004, many reefs of the archipelago were destroyed by the tsunami.

If you want to go to Ko Similan, you should go to the island as early as possible, because from 11 o'clock some speedboats approach the island, which are mainly filled with numerous Asian vacationers and make the relatively small beach section quickly seem crowded. From 2:30 p.m. the hustle and bustle on the beach slowly decreases again and around 3 p.m. you have the beach to yourself. At 5:30 p.m., the last tender boat collects the guests and returns to the ship, where most passengers are already preparing for departure the next morning. A week in the Andaman Sea is coming to an end. And with it a week of pure relaxation, mostly in paradise and on a fantastic ship. 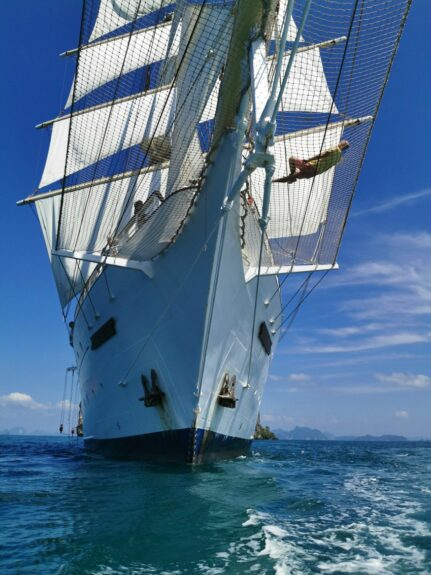 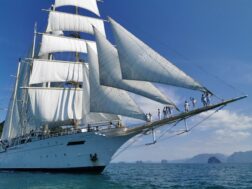 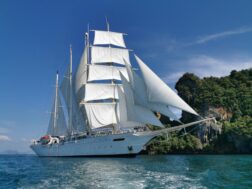 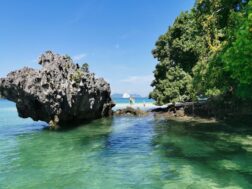 More info about the trip with Star Clipper

The voyage "Southeast Asia / Southern Route" with the Star Clipper starts in Phuket. The journey to Phuket takes place e.g. via Bangkok with Thai Airways or Lufthansa. For more information, please visit the website of Star Clippers. 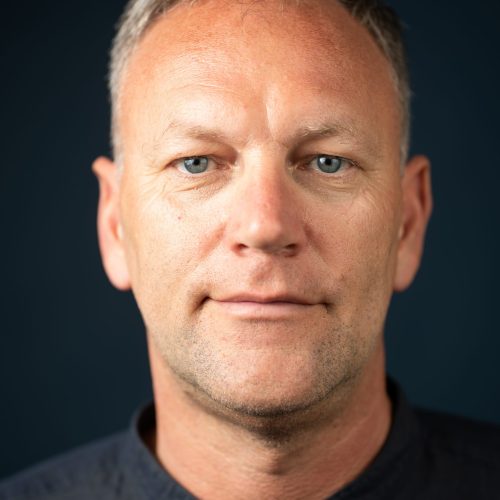 Jörg Baldinhttps://www.breitengrad53.de
Jörg Baldin is the founder and editor-in-chief of breitengrad53.de. In 2011 he turned his passion into his profession and put this travel magazine online for the first time. As a globetrotter, Jörg is at home everywhere in the world and loves nature, the sea and beautiful sunsets on the beach.

Valencia: from tapas to haute cuisine

Valencia is located on the east coast of Spain, directly on the Mediterranean Sea. It includes the three provinces of Castelleón and Alicante. The famous Costa Blanca also belongs to this region. The splendid city on the river Turia has well deserved its name Valencia, the strong one. Because the struggle with very frequent floods for centuries, was only ended in the 20th century.
Costa Fortuna

With the Costa Fortuna to the Lofoten Islands

Steep mountains, deep green valleys and crystal-clear waters ranging from light turquoise to dark blue: the world of Norwegian fjords and archipelagos is an impressive cruising ground where there is something new to discover on every voyage. During a Norway cruise, the chain of highlights does not break. The landscape of the thousand-island kingdom changes around every bend.
Advisor

Germany's eastern neighbor benefits from its great diversity as a year-round travel destination - especially the northern regions. Here, in addition to the Baltic Sea coast, thousands of lakes and extensive forest areas, there are even hills suitable for skiing. A new travel book tells about it and reveals the most beautiful cycling and hiking trails, paddling rivers, castles, villages, towns.
Germany

Not only since Corona have bicycle tours enjoyed increasing popularity. And what makes a cycling trip, which already provides plenty of exercise and fresh air, even healthier? Cycling vacations "on prescription", combined with autogenic training and a course in healthy eating. Best of all, most health insurers give a subsidy of 150 euros if you apply for it in advance.
Load more

Uganda - The Boss in the Jungle

Family vacation on the Katschberg

The best finca in the world

Our travel magazine - We are all about travel & cruises

Our travel magazine is for people who are looking for something special when traveling. Countries all over the world are brought to life for the reader in our online travel magazine through interesting and exciting reports, great pictures as well as entertaining videos.

A large team of authors publishes on breitengrad53 a variety of texts about cruises, city trips as well as travels through different countries of this world. As an experienced travel journalist, founder Jörg Baldin and his team of authors offer high-quality travel reports from all possible corners of the world. Often accompanied by emotional pictures and entertaining videos, which can also be found on YouTube. breitengrad53.de is always authentic and independent. Germany's best online travel magazine. Many pictures of the trips and cruises are also published on Instagram, Facebook or Twitter.

Copyright of the contents

The copyright for the texts, images and videos in this online travel magazine belongs to the respective authors. Publication may only take place with the prior permission of the author.